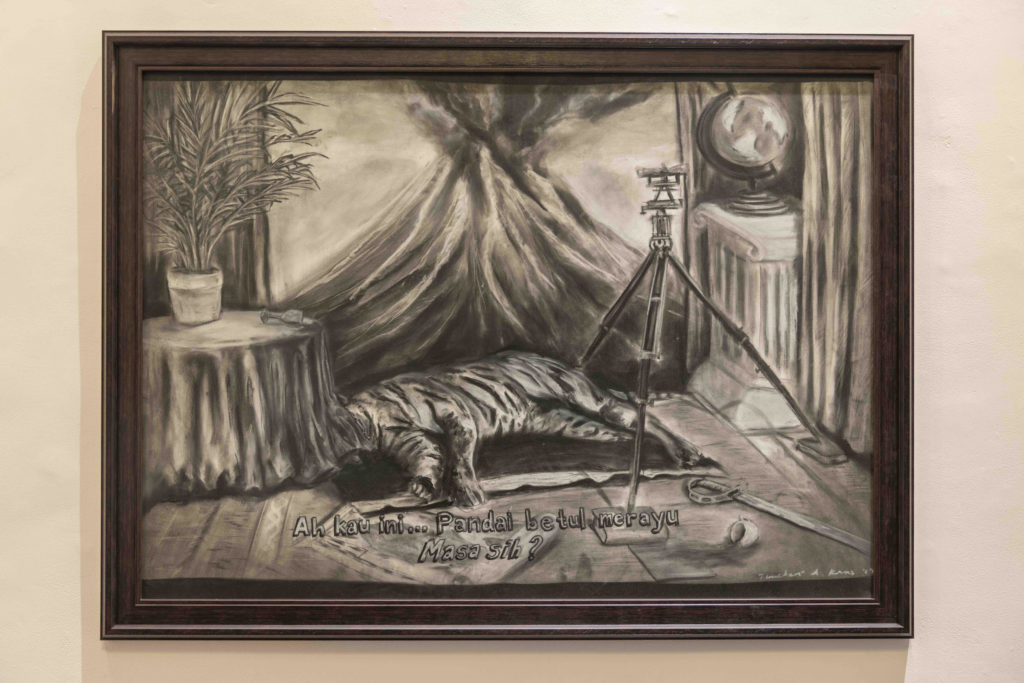 Installation
Including a drawing, texts, and papier mâché masks

In ‘Mindful Circulations’ the Indonesian artist Timoteus Anggawan Kusno presents Love and Death Under the Tropical Sun, an installation with a drawing, five masks, and texts in which the artist engages with the tiger fable in the colonial and indigenous culture of the Indonesian archipelago. Kusno’s artistic practice merges fact and fiction, plays with internalised institutional structures, and confirms expectations in ways that make viewers almost take his art seriously.

The artist started his research about the tiger ritual shortly after establishing the fictional institution known as the Centre for Tanah Rucuk Studies in 2013. Tanah Rucuk is a fictional place in the territory of the Dutch East Indies. The first documentary produced by the Centre for Tanah Rucuk Studies is Others or ‘Rust en Orde’ (2017). The video mixes images of archival materials with fictional evidence such as miniature drawings Kusno made for the film, combined with paraphrased eye-witness accounts. The subject of the short documentary is Rampokan Siluman Macan, a fictional ritual in which a tiger shapeshifter is hunted down, then pitted against buffaloes or bulls. This narrative is developed from the Rampokan Macan ritual during colonial period. The ritual entertained the kings of Java who invited colonial officials to the spectacle in which the tiger would always lose the fight and die in the end.

The fable of the bull and tiger fight comes from the Sanskrit text collection Hitopadesha, the first manuscripts of which date back to the fourteenth century, although the fables it contains are probably much older. There are diverse Javanese cultural adaptations of the fable, but specifically in the context of the Rampogan Macan ritual, the tiger is a metaphor for disorder in society, an evil spirit who threatens harmony within the community. This process of ‘othering’ and ‘shape-shifting’ fascinates Kusno and motivates his work.

The documentary title Others or ‘Rust en Orde’ mirrors the artist’s idea of the tiger actually being the ‘other’ that was sacrificed to enforce the colonial policy of ‘Rust en Orde’ (‘Peace and Order’). When Suharto established his authoritarian regime in the Cold War era, his ‘Orde Baru’ (‘New Order’) kept this policy of maintaining social harmony and stability, at the expense of lives deemed as ‘Other’. Even after Suharto’s New Order government fell in 1998, many people who were considered shamans, witches or ‘others’ were killed by mobs. This process of ‘othering’ is central in Kusno’s work.

In Others or ‘Rust en Orde’, masks appear to have been used in animist tiger rituals. The papier mâché masks in the showcase are the artist’s design for what these masks may have looked like. They are combined with texts based on collected testimonials on mob violence in Indonesia. Kusno has been collecting such testimonials since 2014. The texts he presents in ‘Mindful Circulations’ are paraphrases of these personal and collective stories mixed with stories from James T. Siegel’s book Penjahat Gaya [Orde] Baru (2000).

In the drawing, Kusno rearranges some orientalist ideas about what the Dutch East Indies looked like. We see a volcano as well as a tiger, both popular subjects in the imagination of painters in the Dutch East Indies. Yet, in Orientalist painting the volcano never erupts as it does in Kusno’s drawing, which is inspired by the first Indonesian painter Raden Saleh’s famous depiction of the eruption of Mount Merapi. In Javanese culture, Mount Merapi is a spiritual guardian of the community living around the volcano. The sleepy tiger depicted in front of the volcano seems not to care about anything. The (imaginary) voiceover dialogue states, “Ah, you … are a really smart talker (Ah kau ini … Pandai betul merayu)” “Am I? (Masa sih?)” Kusno’s approach explores the fluidity of fiction and history as ‘empty signifiers’, as a form of questioning, a way into the labyrinth, an approach to the ‘imaginary’ or the ‘non-existent.’ Kusno’s drawing also depicts several tools that colonial agents used to measure and protect their presence in the Asian territory: surveyor’s equipment, outdated maps, a globe and antiquated weapons, objects that have become empty signifiers in the age of electronics, satellites and digital data. 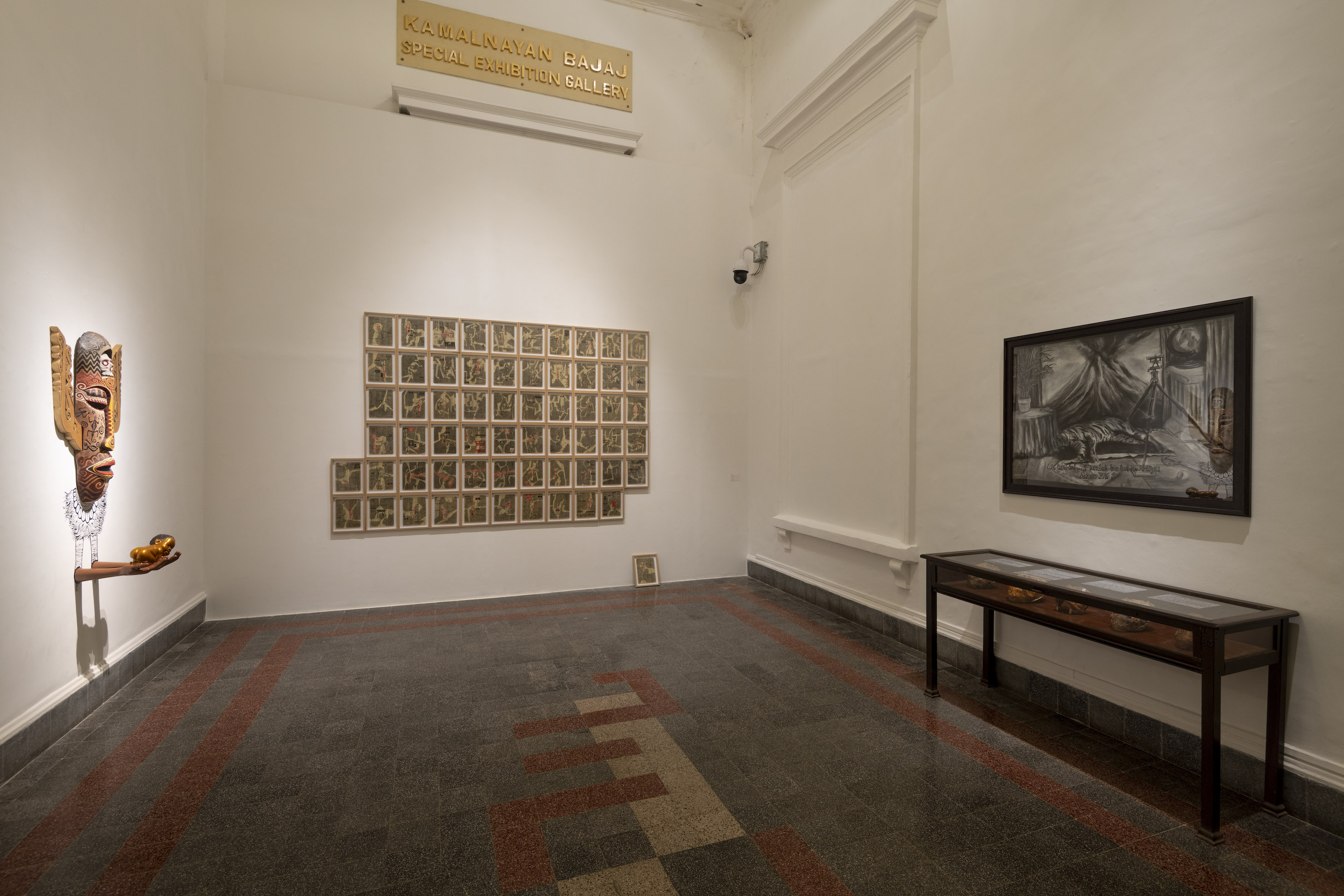 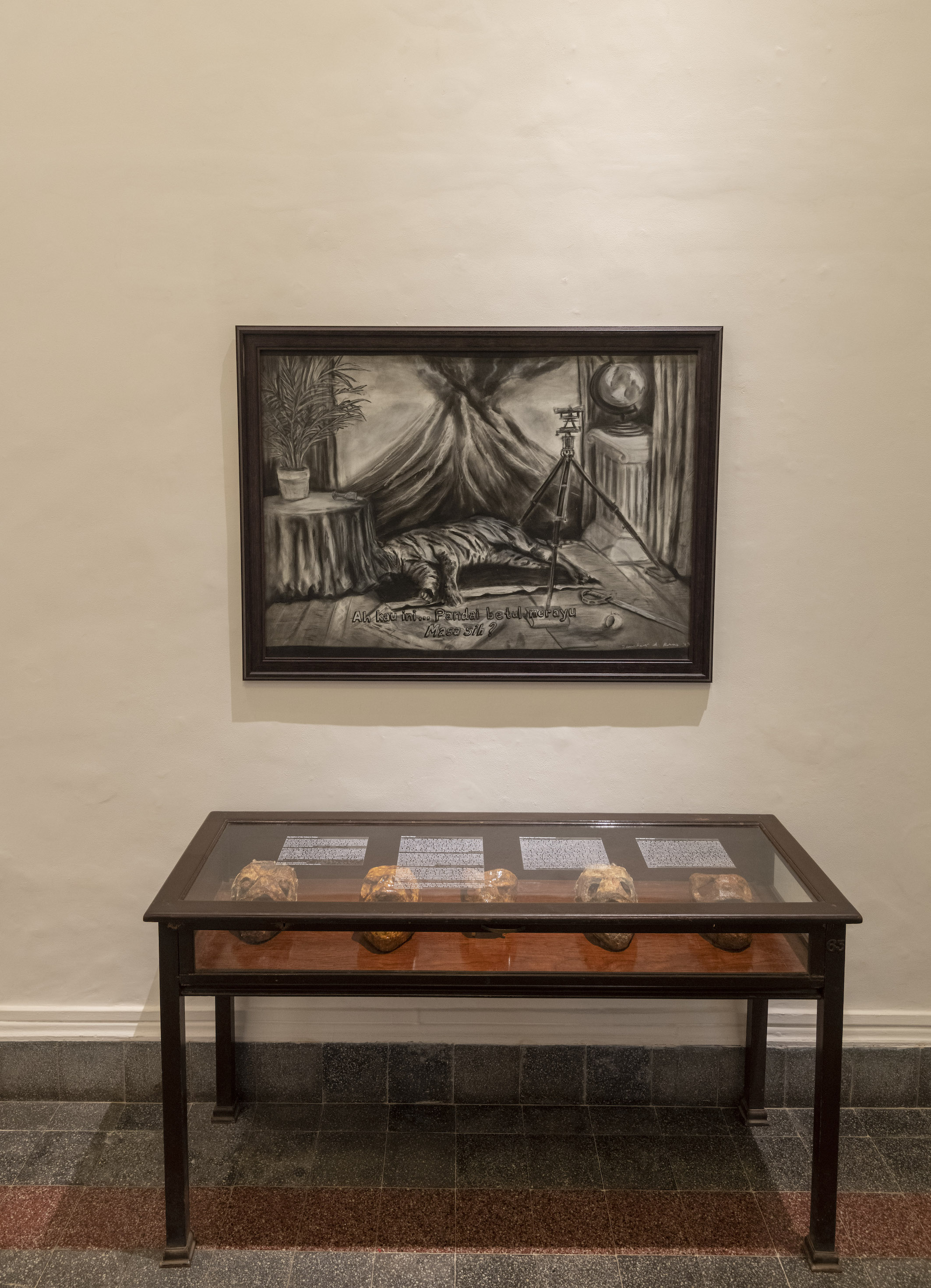 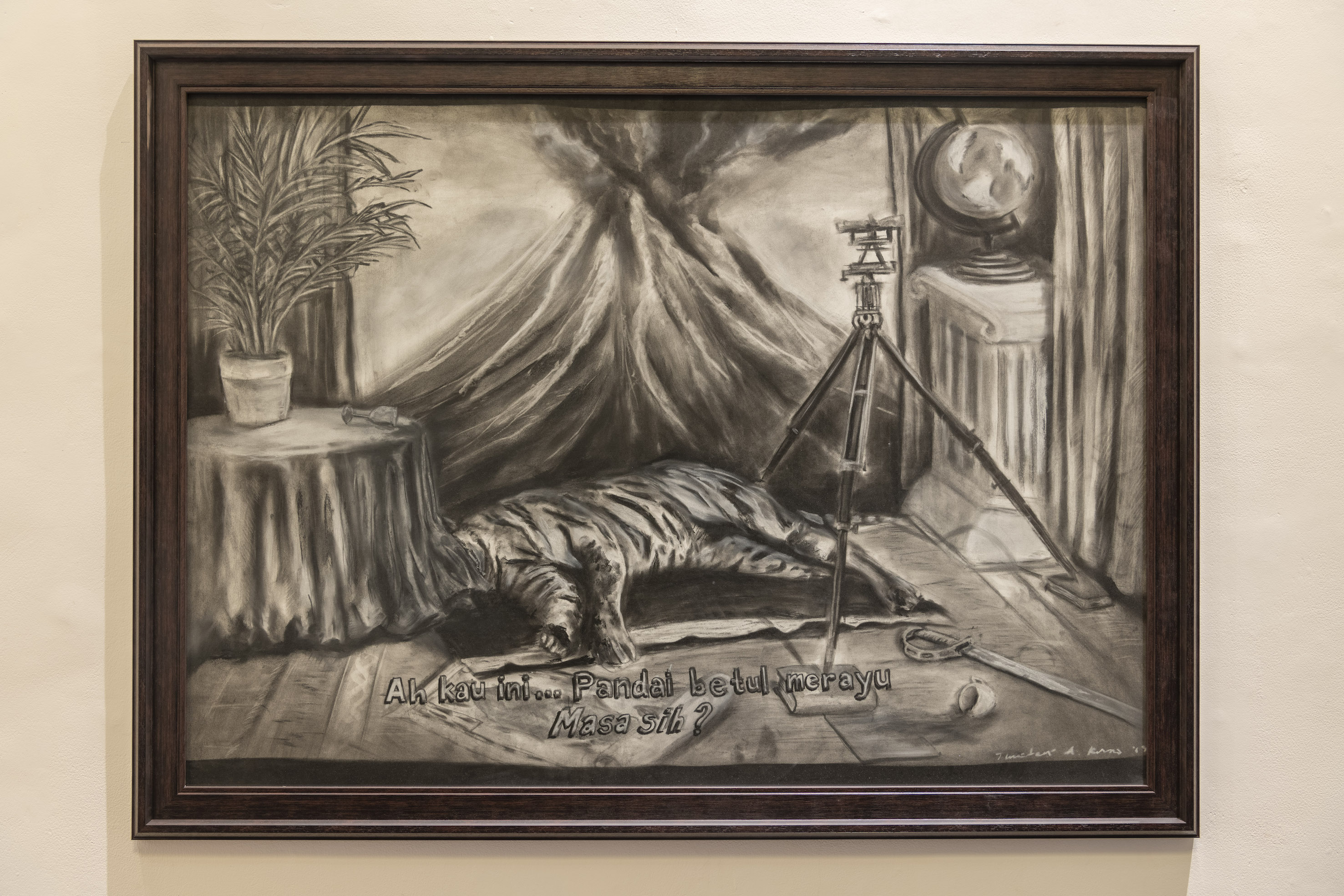 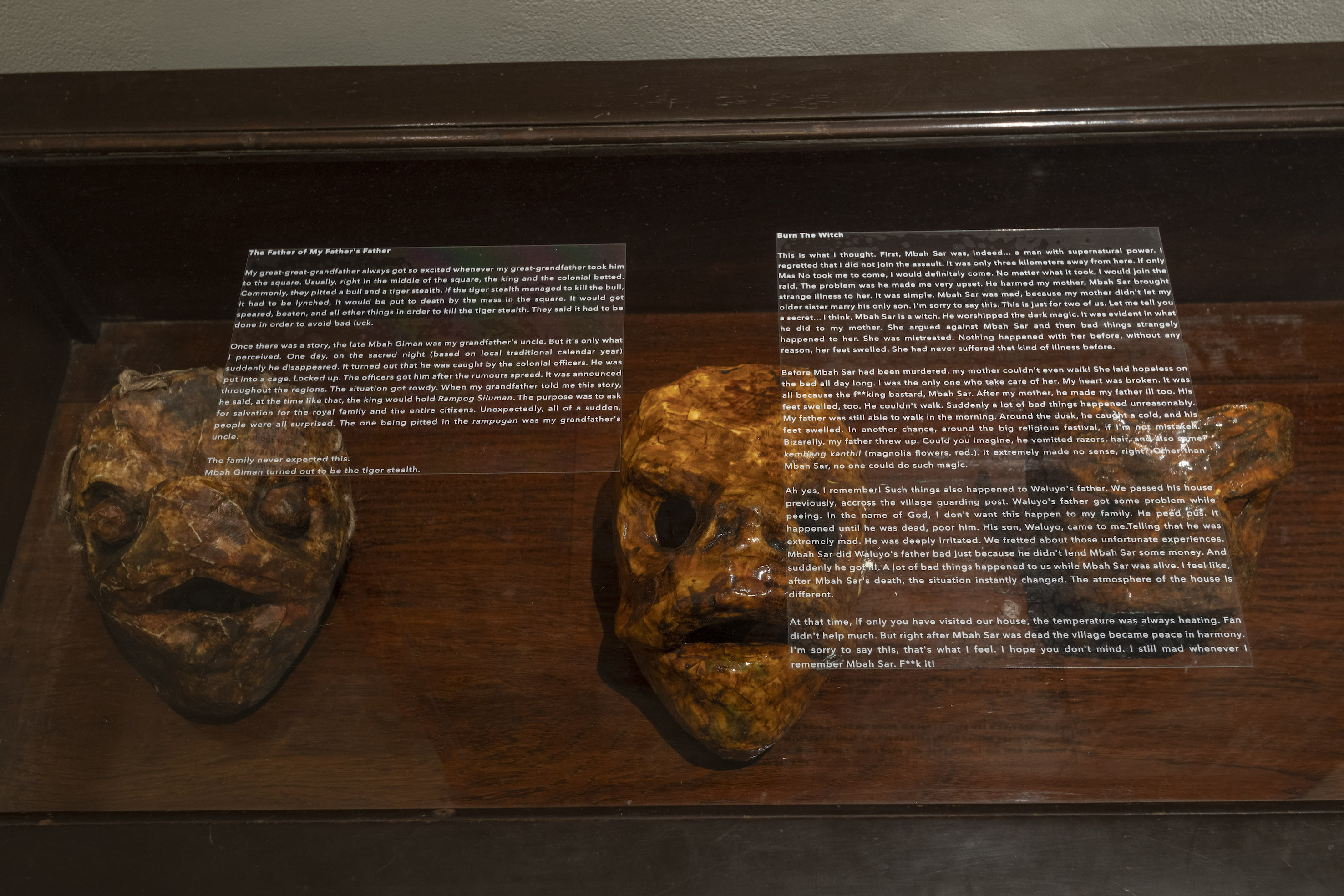