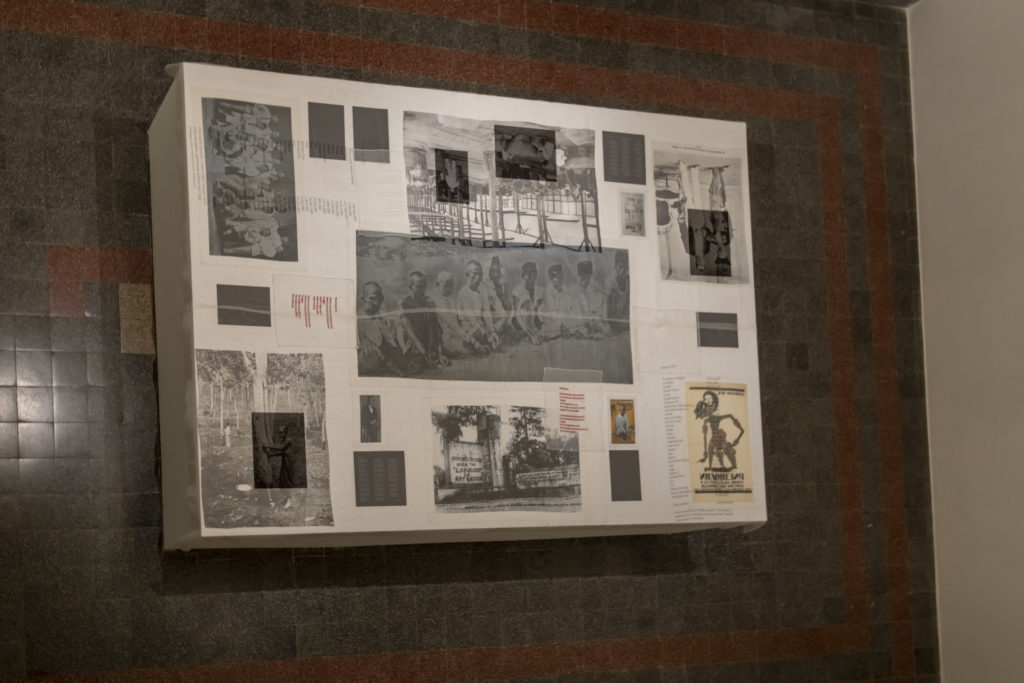 Installation in three parts (A, B, C)
Including photography, digital prints, prints on textiles and embroidery

prologue (2019) is a new installation made by Lidwien van de Ven for ‘Mindful Circulations’ and based on the artist’s research about the independence movement in the Dutch East Indies. At the beginning of the twentieth century, a new and modern form of Indonesian resistance against Dutch authority emerged in the Dutch East Indies. Modern political organizations and actions, such as unions, parties, strikes, mass mobilization of people, meetings, newspapers and writing in the Indonesian language, were established. Resistance to the Dutch occupation in the archipelago began already earlier, but Van de Ven was specifically interested in traces of the resistance movement in the first half of the twentieth century in which also the notion of Indonesia was established and became more widely used. She translated her research findings and ideas into an installation based on archival material, photographs and literary sources.

A
This collage on a large pedestal consists of different layers. The bottom layer includes images of the resistance against the Dutch colonial regime from the beginning of the twentieth century. Photographs related to the resistance movement in Indonesia are rare, because the archives are largely made up of colonial perspectives. Therefore, black squares and texts are also part of this layer. Another layer is formed by a sheet of transparent organza with images and text printed on it. Besides some of the Dutch propaganda images of the colony it provides the list of export profits from 1927 which Sukarno cited in his essay ‘Swadeshi and Mass-Action’ (1932) to illustrate the capitalist appetite of the Dutch regime. Sukarno likens the exports to “the list of the ‘buffet supper’ in the feast to celebrate the ‘civilization-peace-and-order’ held by imperialism in Indonesia!” The top layer consists of poems embroidered on organza.

B
This part of the installation contains the essay ‘Swadeshi and Mass-Action’ written by Sukarno in the Indonesian language and first published in 1932, as well as its English translation. In his text, Sukarno compares the methods of the independence movement in India and Indonesia. Challenging the Dutch East Indies’ import/export figures of 1927, he argues that the Dutch colonial system in Indonesia is different in character, different in its ‘color’ from the British system in India in that the Dutch had a different practise and needs of colonial governance. According to Sukarno, the Dutch imperial practise was set on massive export of products like oil, coffee, tea, rubber, and other things mentioned on the export list that belongs to part A. In contrast, the government of the British Raj did not only export raw materials, but also saw the colony as a consumer market for products ‘made in Britain’ to extend their profits. Sukarno considers whether the Swadeshi movement in India could also be an effective way to target the colonial power in the Dutch East Indies. Swadeshi resistance involved the boycott of British products, but since products ‘made in Holland’ were not available in the Dutch East Indies, a boycott would not make a difference. Instead, Sukarno propagated ‘mass action’.

Furthermore, B features a print of a caricature drawn by Sukarno in 1932 and published under his pseudonym, Soemini. The caricature depicts Boven-Digoel, the Dutch prison camp in West Papua, established in response to the 1926/1927 Communist rebellion and kept as exile camp until 1943 for Indonesian resistance leaders or anyone seen as a threat to the ‘civilisation-peace-and-order’ that the Dutch wanted to maintain.

Next to the caricature is a page from the ‘Persatoean Indonesia’ (1929/30) the press organ of the Partai Nasional Indonesia (PNI) of which Soekarno was one of the chief editors. This page is taken from an essay discussing Gandhi’s resistance against the colonial regime in India.

C
The third part of the installation consists of three large photoprints attached to the gallery walls. One is a photograph of the prison camp Boven-Digoel made in 1929 with a view on the Digoel river. The second one, also from 1929, is a photograph of the internment camp Tanah Tinggi with makeshift houses made of zinc and the military barracks. The third picture is a rare image of the female branch of the Sarekat Rakyat (People’s Union) / Partai Komunis Indonesia (Communist Party of Indonesia), taken in 1925, shortly before the communist riots to which the Dutch authorities responded with mass arrests and the construction of prison camps in Boven-Digoel, West Papua. 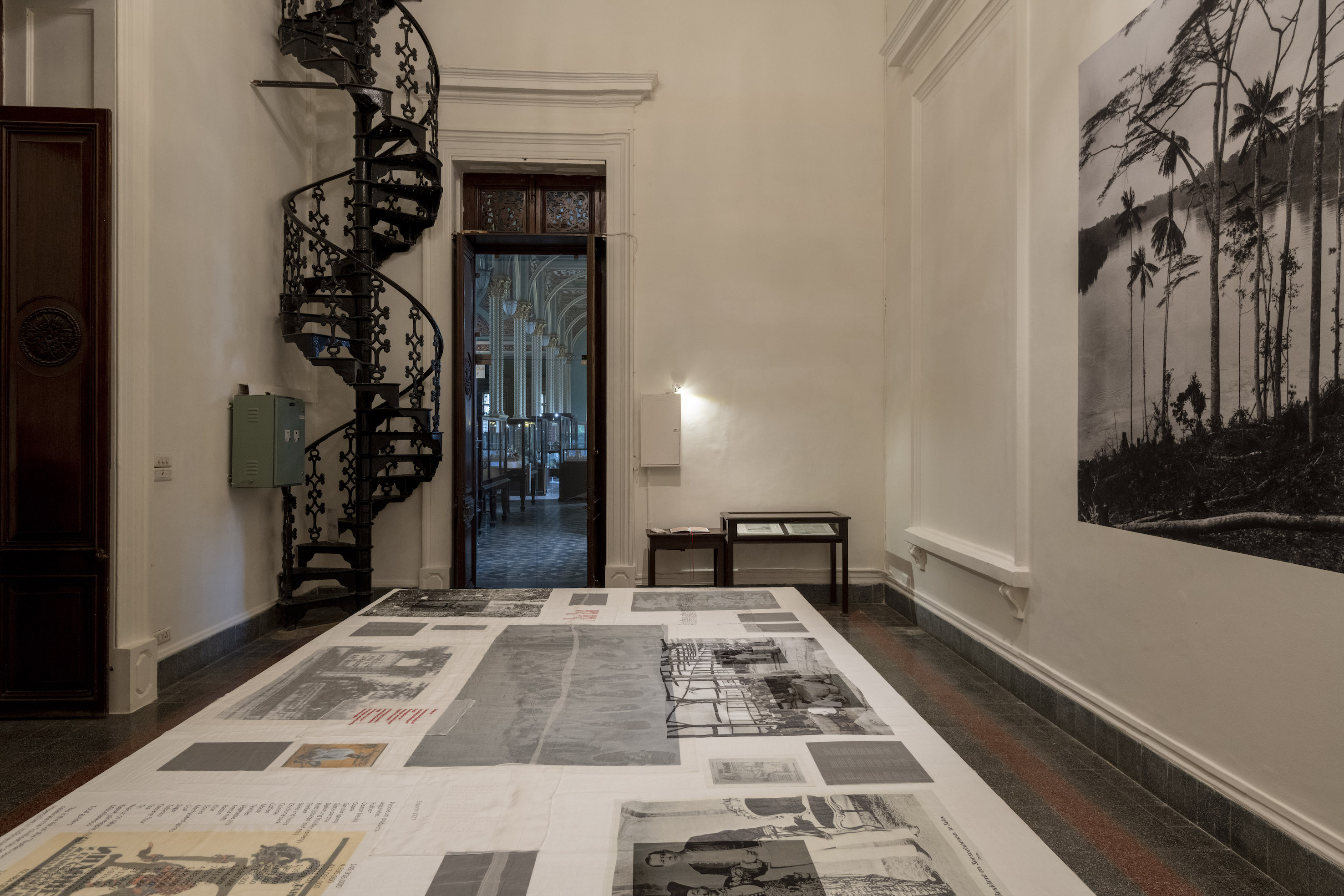 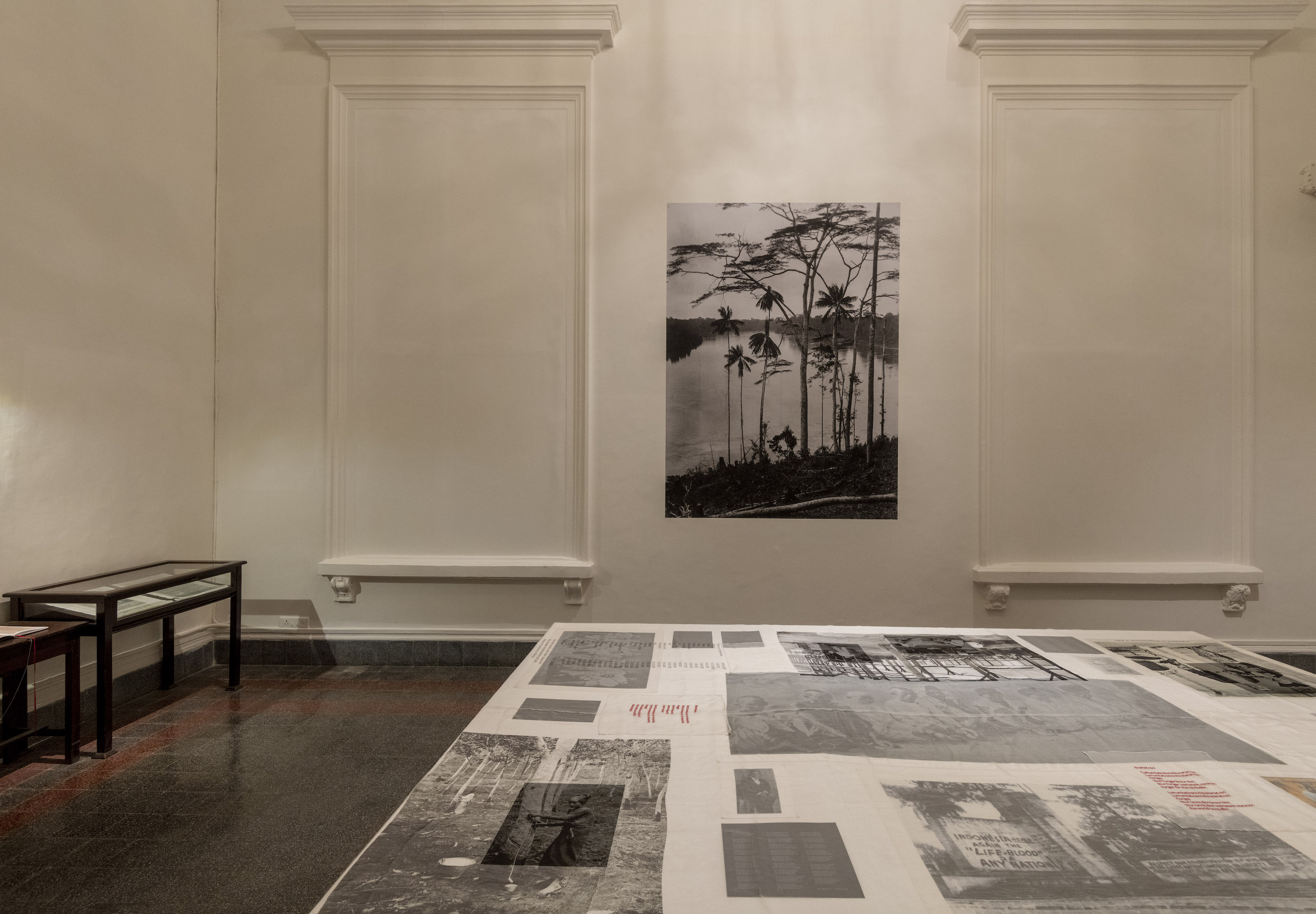 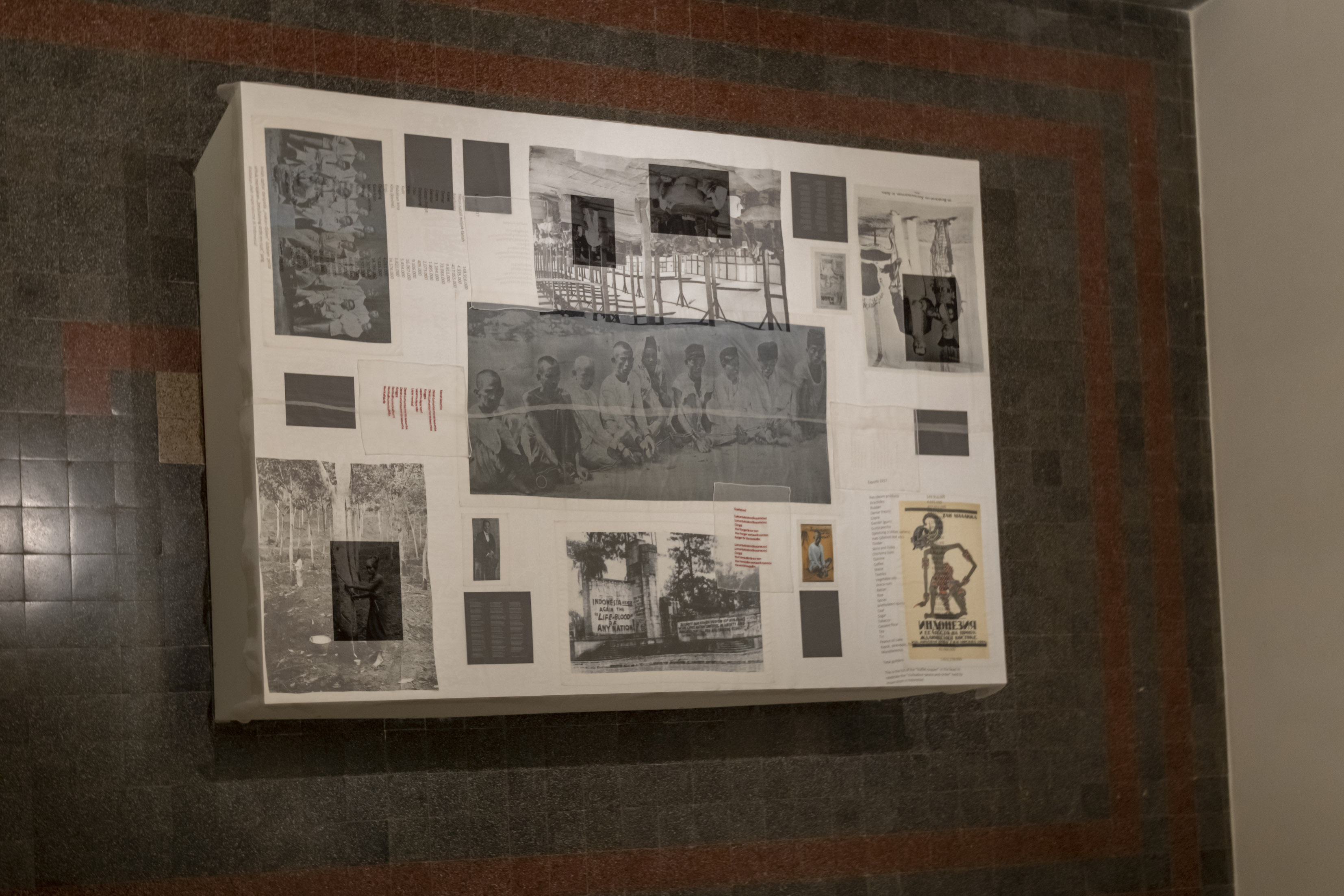 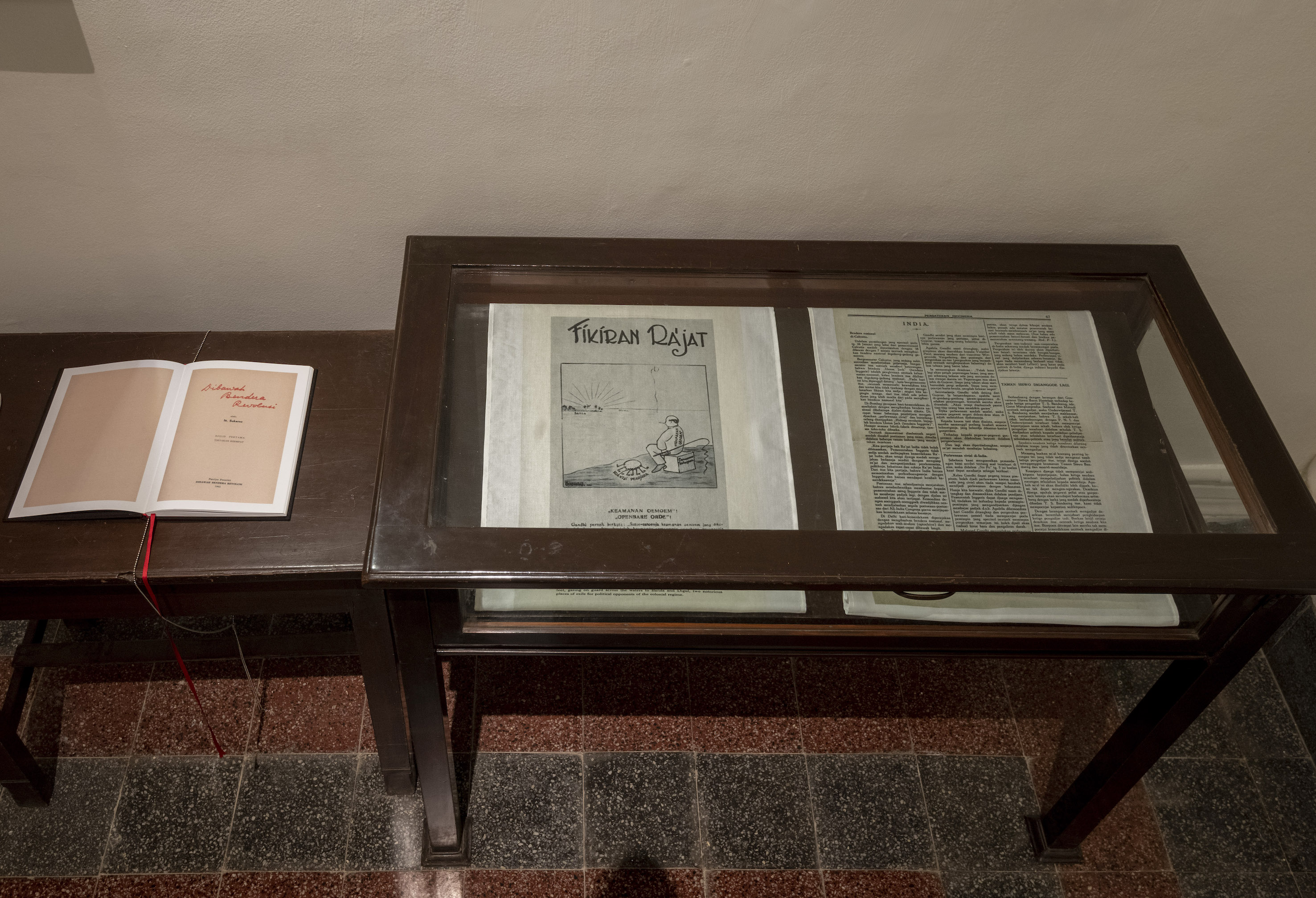 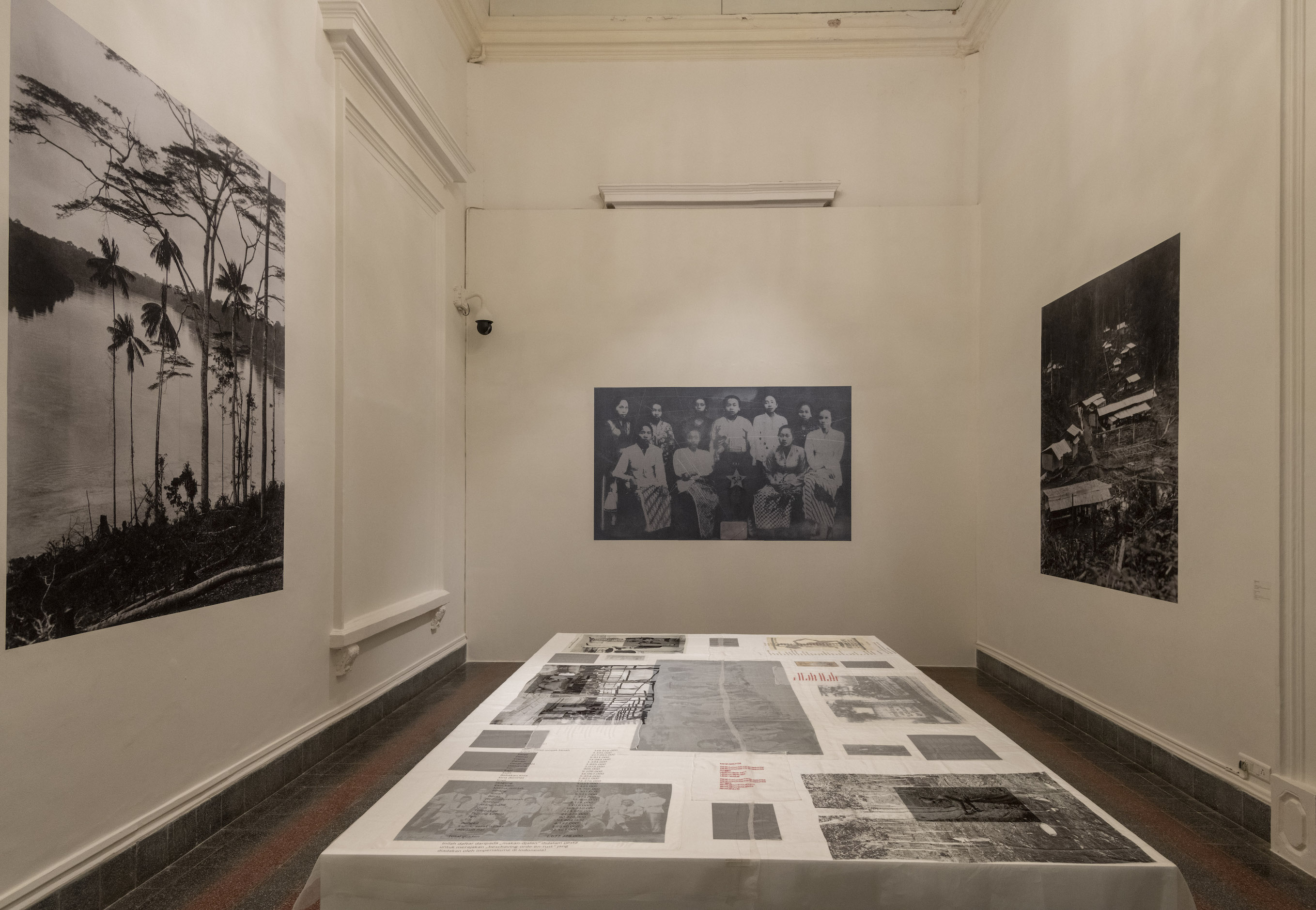